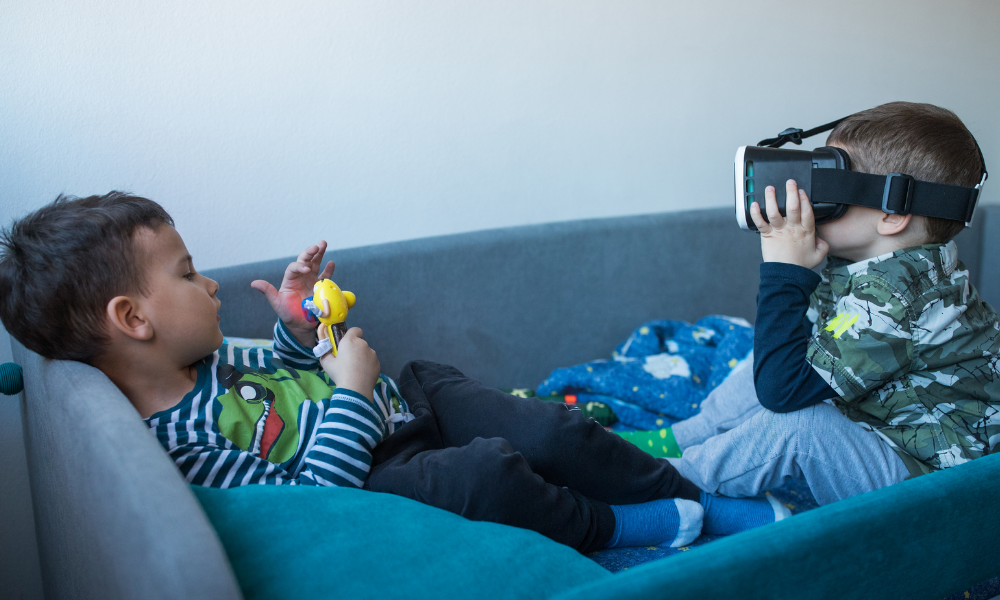 We held out as long as we could. And it wasn’t very long. I read a statistic one time that said something like 95% of boys play video games. 95%! How do you compete with that? My wife and I have two boys so our chances of keeping video games out of the house were pretty much shot the second the X chromosome laid eyes on the Y chromosome across the crowded DNA strand. We were never into video games before the kids came along. My wife didn’t like them because…well she’s a girl. Sorry to generalize and sound sexist, but that 95% of boy gamers drops to about 25% for girls. And while I played a video game or two as a kid, I never really obsessed over them…probably because I have the hand/eye coordination of a Tyrannosaurus Rex. With the popularity of video games today we knew it was inevitable, but we wanted to keep them out of the house for a long as possible. Maybe until they’re, say, 10? Stop laughing. We may have been naïve but we really thought we had a shot. Then my 5 year old discovered Super Mario Bros at a friend’s house earlier this year and those Italian paisan won the war. (Italians won a war. There’s something you never hear.) He was hooked. When the time came, he quickly hopped on Santa’s lap and placed an order. Santa rolled his eyes, but realized resistance was futile.
We decided to go with a Wii because the games are more active and get the kids up and moving. If they were going to play video games all day, they were going to work up a sweat while doing it. It sort of worked. One of the games we bought was Dance Party 3 which is a fun game in which you copy the moves of the dancers on screen. It’s a great workout and trust me when I say you’ve never seen anything more cute than a 5 and 2 year old dancing hip hop to “Pump It” by the Black Eyed Peas. Even their Mom and Dad danced a song or two although their Dad almost had a heart attack. My epitaph would have read “Death by The Pointer Sisters’ I’m So Excited”  But the “keep them active” plan backfired as well because the Wii console comes with Super Mario Bros included for free…which requires no activity whatsoever. And my son’s favorite game? Yup.  He’s a 5 year old junkie and that bastard Mario is his dealer. Completely addicted. He could play all day and would too if it weren’t for those pesky human functions like eating and sleeping. Notice I didn’t include “going to the bathroom” on that list. That’s because I constantly see him playing the game while hopping from foot to foot in a manic dance of “holding it in”. While I appreciate the fact that he is getting a little bit of exercise I have to yell at him,” Put that thing down and go to the bathroom now!” Every now and then I’m tempted to see what would happen if I didn’t say anything.
The key word in that last sentence is “tempted”. I’m wrestling with the Bad Dad devil on my right shoulder that is telling me that my job could be so much easier if I just turned that damn thing on and let him play it as much as he wanted. A free babysitter for as long as I need. I could get stuff done around the house; I could run errands without the constant “Why are we here? When can we go home? Can I have this or that or that?” I could, dare I say, relax with a good book! Remember reading, parents?! Just as I crack open a book that doesn’t rhyme or have pictures though, the Good Dad devil on my left shoulder appears and ruins everything. He shows me the future and there’s my morbidly obese 25 year old son, sitting on his bedroom floor in a filthy t-shirt and shorts about to reach the highest level of Super Duper Mario Bros. 26. Strewn on the floor around him are half eaten bags of Cheetos and empty Red Bull cans. I recognize his bedroom because it’s still in my house!! This thought alone is enough to make me reach for the “off button”. So video games have infiltrated our home like termites. Now it’s up to me keep them from burrowing too far into my kids’ brains.

What You Need to Work from Home – A Checklist

Getting started working from home may involve a lot of preparation or very little, depending on what you already have and how far you’ve already gone with your work at home plans.  The following is a basic checklist to help you get started.
Computer
Of course, you’ll need a computer.  But, you knew that, right?  Nonetheless, it’s not necessarily enough just to have any old computer.  For working from home, you will need a computer that can be your daily work horse – it needs to be up to date, have plenty of memory, and functional USB ports.  If you know others who work from home, ask them what computer they use, and why.  Also, ask them if they would choose a different computer if they had to do it over again.
Laptop or Desktop?
While you are considering what computer will best serve your purposes, you will probably need to decide between a laptop and a desktop.  Most sources recommend both – using your desktop for daily tasks (desktops usually have more memory) and your laptop for certain projects and for back-up.
The ideal situation is a desktop and router, and a laptop with a wireless card.  The wireless card plugs into your laptop’s USB port, picking up a signal from the router and allowing you to connect to the internet using your laptop.  Then, you can do the bulk of your work on the desktop and grab the laptop when you need to finish something up or work on a project somewhere else in the house.
Broadband Internet Connection
It’s pretty much impossible to work from home effectively without a broadband or high-speed internet connection.  Dial-up takes far too long and will greatly inhibit your business capabilities.  So sign up with the internet service provider (ISP) of your choice and get set up for high speed internet.
Family and Childcare
Many people choose to work from home in order to be near their children.  However,  childcare is necessary during your work hours.  This can be a dilemma – making enough money to pay for childcare right off the bat is challenging.  Try relatives first – grandparents, aunts and so forth may be willing to watch your children for a few hours a week each, and for free.
Then you can check into mother’s helpers; these are childcare providers who come into your home and take care of your children while you are there.  Mother’s helpers are much less expensive than conventional babysitters, because you are on the premises and the helper is using your home.
Babysitters who will watch your child in their home are more expensive.  If your children are in school, you can arrange your work hours around their school hours.
Workspace
While this goes on your checklist, it’s highly individualized.  Some people are happy with a workspace in the corner of their kitchen; others prefer an entire room dedicated to being the home office.  The important thing is to have some kind of area set aside for you to work in.  This helps you get in ‘work mode’ more quickly since you will associate your surroundings with working, and it also sends a signal to other family members that you are working when you are in that area.

Julianne Alvarez-Wish is a military wife, mother, business owner, professional writer, blogger and legislative advocate. She is the Director of Communications for Our Milk Money, the Colorado State Leader for the National Association for Moms in Business and the owner of Buy By Mom and Buy By Mom Blog. She is the Colorado Springs Stay-at-Home Mom Examiner for Examiner.com. She also blogs at A Wishful Thought. Her passion, purpose and goal is to help parents work from home so they can be home with their children.