The last time I checked I wasn’t a fifteen year old girl from the 60s, but I was surprised at how affected I was by the death of Davy Jones last week.  Then again I guess it makes sense. I was a Monkees fan before I was a Beatles fan (and anyone who knows me knows there ain’t no bigger Beatles fan). My brother and I used to come home from school and watch the reruns of the Monkees show in the 70s. Then we would play the Greatest Hits album and transform ourselves into the band playing in front of thousands of screaming girls. My brother was a Mike Nesmith fan so he would play the guitar (on a tennis racket). I was a Micky Dolenz guy so I would play the drums (on my hamper). I know the Monkees are seen as a bubblegum “fake” group, but the show and their music is brilliant and still holds up 45 years later. That band sparked my love of comedy and music, two things that still play such a big role in my life to this day.

So what does this have to do with a Daddy blog? Well, I got to thinking about memories and when they start to stick. My oldest will be six next month. I think I was around his age when I discovered The Monkees ergo music and comedy. My sixth year of life was when things really started to click. 1977: The year of my first obsession, “Star Wars”. First grade.  The year I started to make friends that I still have today. Six is still my favorite number because of that year. I swear. I remember at the time my mom asking me “What’s your favorite number?” I yelled out “Six!” My older brother looked at me and snarked, “Oh so is seven going to be your favorite number next year?” (jackass). I replied”uhh…no.” and so it stayed six.

So as far as my son goes, the window of “Oh he won’t remember this when he’s older” has slammed shut. This time when I screw up as a father, it’s very possible I’ll be doing some real damage. How’s that for pressure? I also gotta get my head in the game and start the wheels of influence. First up? I’m breaking out the season one DVD box set of The Monkees. (Yup. I own it.)

Chris Loprete, aka the father of Our Milk Money, began writing his experiences as a new father upon the launch of Our Milk Money, calling his work, appropriately, The Daddy’s Den. Chris is no stranger to comedy composition. He wrote and performed his one-man show You’re from Philly, Charlie Brown, having successful runs at Circle X Theatre, The Lonny Chapman Repertory Theatre and The Comedy Central Workspace in Hollywood, California as well the Philadelphia Fringe Festival. Chris has performed all over the country in theatrical productions, television and film. He is an alumni of The Circle X Theatre Company and The Groundlings Sunday Company. Currently, he is a writer/producer for the Comedy and Reality Promo Team at ABC Television. Chris lives in Stevenson Ranch, California with his wife Ally, founder of OurMilkMoney.com and his two beautiful sons, Braden and Henry. 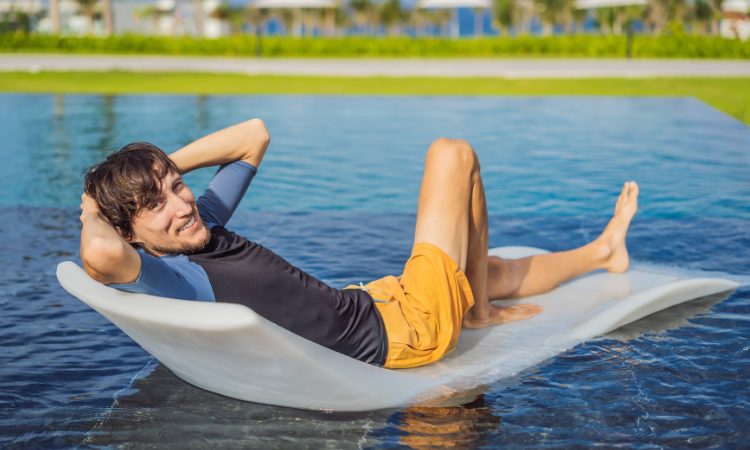 As I write this, I am sitting poolside in Vegas with a Tequila and Tonic in my hand talking to five of my closest buddies about what to do with the money I just won from a bet on an NBA game. Okay that last sentence is not entirely true. I’m writing this 2 weeks after that scenario.

To be honest sometimes writing these blogs is work and the last thing I want to do when I’m on vacation is anything that resembles work. And two weeks ago I took a much needed vacation. I won’t go into the details of the trip (what happens in Vegas blah blah blah), and if I did it would probably bore you anyway. Let’s just say I’m getting very old.

The point and this month’s Daddy’s Den lesson is how important it is to take a break. Whether it’s an evening with the guys, a movie by yourself, or a longer vacation even just overnight, recharging your battery is essential to a healthy family life. Believe me, your wife and kids will thank you for it. Not only do you come home happy, rested, and ready to take over the domestic chores and parental duties for awhile, but you’re also so grateful to your wife for letting you go that you’re taking care of the kids and “honey do” list two weeks before you even leave.

And ladies, don’t think I’m forgetting about you. You need a break as much as the Dads. More so if you’re a stay at home mom. But I’ve found that men and women are wired differently in that regard. Whenever my wife has girl’s night out or a weekend without the kids, she always ends up coming home early because she misses us. On Mother’s Day y’know what she likes to do? Spend it with her family! What’s up with that? I don’t know whether to hug her or get mad at her for making me feel guilty for wanting to get away once in a while. I mean am I a bad father for wanting to do everything on Father’s Day BUT be a father? I’m outta there! I have learned one thing though. Getting away is important. But since becoming a husband and father, I’m no longer sad when it’s time to come home.

What Does Your Milk Money Pay for?

Seriously, I want to hear from you. You’ll be doing me a favor, yes. I am going to use this information for my upcoming book. The publishers apparently need to see proof that this is a trend, and parents really are becoming self-employed as an alternative to daycare and long hours away from home.
So, help me out, and you’ll be helping the movement.
WHAT IS MILK MONEY?
It’s the revenue that you bring in from your home based businesses. Its the funds that help you give to your family, and lead lives of freedom. Milk Money does not make you rich, we all know that, but its filled with value. It’s filled with the freedom to be your own boss and to be able to make your own choices in support of your kids. Leave me your comments. I’ll go first.

Start slow. Offer your services for free to family and friends- just in the beginning. This will help you build up a client base, as well as give you a chance to get the hang of things without the added pressure of being perfect. Send out an email to friends and family telling them of the service that you are offering, and tell them that you are willing to waive your fees just so you can gain a bit of necessary experience. In exchange, you may ask for them to support you in another way such as contributing to an email campaign, or watching your kids for a few hours a month. If you have never done anything like this before, give yourself room to grow, and don’t be so hard on yourself if you mess up. You will learn from the mistakes that you make, and this will make you a better entrepreneur.
Self-employed Parent Enthusiast Ally Loprete is the Founder of OurMilkMoney.com, a nationwide online business directory of self-employed parents, and the host of This Little Parent Stayed Home, a live weekly radio show which is a part of the Her Insight Group on Toginet.com. Ally is on a mission to help others deal with the sometimes overwhelming prospect of leaving a full time job to start a new business, while running a full time household and raising kids. She is resolute about creating a haven in which parents across the nation will continue to thrive and obtain the support they need in their personal journeys. 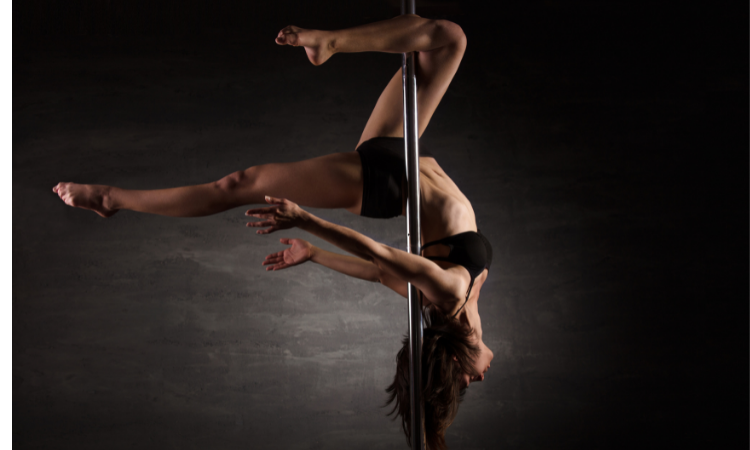 Stripper poles should not be a part of a home. If you own one and I’ve offended you I apologize (sorry mom), but I personally can’t imagine explaining it to my daughters. This new exercise fad serves as a reminder of all the stuff I’ve pushed aside as a responsible parent.

If I didn’t have kids I’d listen to more obscene radio morning show DJ’s with names like Crap Boy & Charlie (oh Crap Boy, you’re so funny and relatable). I’d pee with the door open. I could once again pick my nose anywhere in the house without a little voice nagging, “Put it in a Kleenex dad!” My computer’s music library wouldn’t have all the bad-titled songs “X’ed” out. And I would have a stripper pole. Twelve of them. Less for exercise and more for structural integrity… but yeah.

Come to think of it I’ve been style-shedding for quite some time. Getting married was the first blow. Suddenly my framed Aerosmith poster wasn’t good enough for the living room. Or the basement. Or the frame itself (Dear S. Tyler: I’m sorry*). Gone were the shot glasses above the TV. Everything I gave up was replaced in equal proportion by either a candle or another pillow.

*In a wildly unrelated side story that just crossed my mind: When I was 22 I loved Aerosmith. Borderline unhealthy admiration. Anyway, I was at a dance club trying my damndest to talk to/dance with/touch the shoulder of any girl who’d allow it. One took an interest and danced several songs with me until the DJ played a Run DMC Walk This Way remix. She yelled, “That’s awesome, I love Aerosmith.” My heart leapt. I reached into my wallet and pulled out a plastic embossed card with the wings logo on it and yelled back, “Me too, I’m in the fan club!” The remainder of the night I danced alone.

The change keeps coming in waves. My shower used to simply house soap, shampoo and a razor. Those items all multiplied and had smelly little babies that exfoliate, scrub, and silken. My shower has evolved into its current form… an explosion of rubber ducks, foam alphabet letters and Nick Jr. paraphernalia.

Everywhere I look I see things I’ve either given up or altered for the sake of my wife and kids. Why do we do it… as men, that is? Why we change for our spouses is easy – sex. A high percentage of living room Aerosmith posters directly correlate to a low percentage of boobies.

But why change for our children? They don’t care how badly we decorate. They don’t see the radio morning shows’ raunchy content as negative. They just soak it all up and shape their lives around it. Therein lays the answer.

We dads modify our behavior in hope of being better men, thus creating a better environment for our kids to be shaped. We give up or suppress the ugly in order to grow more beauty. Sure, some of the vices we enjoy as adults are fun and tough to give up, but one look at those innocent, inquisitive eyes and you’d sacrifice anything for them.

I’m a little winded by all this sappiness. I could stand to exercise. You got a pole at your place I can use? I’ll bring my own Aerosmith mix tape. 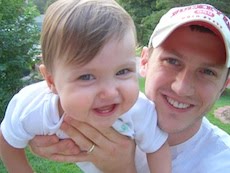 Nathan Bright is a 30-something stay-at-home dad who resides near St. Louis, MO. He is a husband to an amazing woman and father to a doubly amazing 2 year old little girl. His blessed home is scheduled to be even more blessed in March, as Nathan and his wife will welcome a second daughter to their family. When Nathan is not blogging for  The Daddy’s Den, he writes and illustrates his own children’s books. Available for purchase immediately is Maddi Patti and her Stay-at-Home-Daddy.