An Open Letter To People Without Children from People with Children, Part 1

Written by guest blogger, James C. Ferguson
I don’t want to get off on the wrong foot; I don’t want to draw a line in sand separating the people with children from the people without children. I am in no way attempting to say that either group is any way better than the other. Neither am I attempting to ostracize those who have chosen to not have children (or perhaps are unable to). I don’t want to be part of a clique; nor do I want want to judge. But I do feel that there are a few things that I need to share/point out/mention/underscore.

What follows is an informal, disorganized list of points to consider when dealing with either children or people with children. Berate these points, ignore them, embrace them – I don’t care. But here they are:

A.) Toddlers are not pets.

I’ve owned cats. Cats are wonderful. Feed ‘em twice a day, make sure their water bowl is always full, give them an overpriced plastic box to pee in and some furniture to shed on and they’ll be your best friend. But even if they don’t, you can have them put down without going to jail.

I’ve also owned dogs. They entail a little more responsibility than cats – principally due to the fact that for some unknown reason having a big plastic box in your house for your dog to pee in is considered “uncouth.” (The temptation to make a joke here about FOX News is almost overpowering.) Dogs need to be walked. And that requires some scheduling. Depending on the size of the dog’s bladder, maybe it’s a couple of times a day. Maybe it’s a few times a day. Whatever it is, it’s considerably easier than the constant twenty-four hour responsibility of taking care of a toddler.

Sure. When they’re not waking up at three A.M. to vomit on you. And themselves. And the floor. And that pile of overpriced toys manufactured in China.

So if you’re trying to make plans with somebody who has a toddler it’s likely they’re going to say something like this:

“We’d be happy to meet you for dinner but we can only from 5 to 6 because I need to have [insert toddler’s name here] home by 6:30 for his bath so that I have time to get him into his pajamas, read to him and have him in bed by 8 because I need to be in bed by 8:30 because he’s gonna be up at 5.”

Don’t react as if they’ve just told you they collect teeth. Don’t judge. Just roll with it, savoring the fact that you’re probably not going to find food in the laundry.

James C. Ferguson lives in Los Angeles with his wife, daughter and two cats. James’ novel, Context Clues, is available on Amazon.com. And his film, Happy Holidays, is available at iTunes, Indiepix, Cinemanow, Caachi and Eyesoda. Additional information can be found on the Happy Holidays MySpace and Facebook web sites.

The Consequences of Learning

Apparently, as I endeavor to educate my toddler by increasing her vocabulary at every waking opportunity, she – ironically – is turning me into an idiot.

As I mentioned in a previous piece, my daughter adores the written word; she loves books (which, at her reading level of almost two, consist primarily of about fifty actual words plus a never-ending parade of brightly colored genetic testing escapees). It is not uncommon for our daughjter to slip quietly out of sight. But rather than putting all of her socks in the cat’s water bowl, or trying to eat every single piece of fuzz on the carpet, she will retrieve a book from what I call “the library cart” (a little red wagon filled with books), plop down on the floor and begin to read.

My wife and I do our best to encourage this habit. We read to our daughter almost every night. And if she runs up to us brandishing yet another tale of what I can only assume are anthropomorphized aardvark-clown crossbreeds, we temporarily set aside whatever we’re working on and read to her. (Thankfully, she has yet to interrupt any sort of carnal activity.)

Because of what I can only label her aggressive reading habits, our daughter knows a lot of words. And this is where things get paradoxically complicated.

Certain words, if she hears them, elicit such an over-the-top emotional reaction – akin, I’m guessing, to an opera singer getting a wedgie – that we do everything we can to avoid using them in day-to-day conversation. One of the words you can always count on to turn our daughter into Jamie Lee Curtis from Halloween is “milk.” She loves her milk. When she wants her milk, she wants her milk. And if you foolishly happen to utter even part of that particular word anywhere where she can hear you, the sweet child who loves to hug the cats and laugh at The Daily Show turns into a banshee.

So we sometimes find ourselves in situations where you need to use a word like … you-know-what and you do exactly what I just did: you hedge, you weave, you bob, you duck – you do an embarrassing and awkward verbal dance to avoid using the … you know … “it.” And you sound like a complete and total moron. You can feel you I.Q. sliding out your ears. You think, even as it’s happening, “I wish the producers had contacted me about playing Bob Thornton’s part in Sling Blade.”

But I guess that’s how it goes. The new generation replaces the old, like New Coke or The New Monkees. As our daughter grows increasingly verbose we – her elders – march slowly down the path towards life as a bad Saturday Night Live sketch. I guess, at the end of the day, you just have to hope she has her own bank account and a driver’s license by the time you get there.

(And if you happen to be driving by a store anytime soon, would you mind picking us up some … you know.)

James C. Ferguson lives in Los Angeles with his wife, daughter and a pile of books about a monkey. James’ own book, Context Clues, is available on Amazon.com. And his film, Happy Holidays, is available at iTunes, Indiepix, Cinemanow, Caachi and Eyesoda. (Soon, the film will also be available on WebMovieNow, Amazon On Demand and Jaman). Additional information can be found on the Happy Holidays MySpace and Facebook web sites. 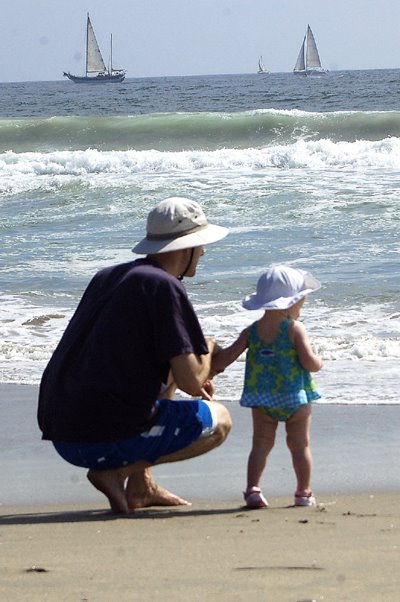 Is it just me or is Curious George kind of an asshole?

Whenever my toddler brings me one of her numerous Curious George books, of course I’m always happy to indulge her; I want her to learn how to read and white and communicate, you know, good. I make a point to read her anything that she brings me: “Wonton Soup,” “jury summons,” “Anderson Bruford Wakeman Howe—How did you find that old chestnut?” More often than not, my daughter’s reading preferences tilt towards a tall, lanky man in a bright yellow hat and his mischievous simian companion.
Some might even say “curious.”
But is he? Really? Or is he just a brat? (A brat who, amazingly, never seems to get his comeuppance.)
“He’s a literary icon,” you say. “You can’t come down against Curious George!”
I disagree; I think that if I saw a child do some of the things George does out in the “real” world, I’d want to drop kick him like the hard drive for my stupid computer (which, as I type this, is an overpriced doorstop that I can’t re-gift).
“But he’s just acting like any normal, ordinary, two-dimensional, multimillion dollar franchise child,” you say. And I agree. Because what you’re essentially saying with that statement is, “He’s acting out.”
And I don’t think it’s fair. My job as a parent is tough enough, man. Of course kids like Curious George because he gets to do all the things that they cannot. He gets to act out … without repercussions! I don’t need some irresponsible simian encouraging my toddler to do things she isn’t supposed to be doing. And I certainly don’t need said simian reinforcing the idea that after a particularly irresponsible action, everything is going to be fine, we’ll share a laugh and the sky is going to rain gumdrops. Why haven’t they published Curious George Gets A Time Out? Or Curious George Goes To Bed Without Reading Himself? Or Curious George Sneaks Into An Abandoned Nuclear Power Plant and Makes Himself Infertile?
I can hear your response: “You’re overreacting,” you say. Or maybe, “You’re making too much of this. You’ve got issues. See someone.”
“Do you have any idea how many of these stories they’ve published?” I counter. On Wikipedia, I count fifty-eight. That’s exactly fifty-six more than my wife and I. They outnumber us by, well—a lot. Those books are like the monsters in Aliens, or the Huns, or Mondays: they just keep coming and coming and coming. They’re unstoppable. We have to protect ourselves; we have to do whatever we can.
Then again, as much as it pleases my cynical side to beat up on a character that brings joy to millions of children around the globe, there was a moment at the playground the other day that made me reconsider my position.
The word “hellion” springs to mind. A mother sat reading as her child—who couldn’t have been more than two—played in the sand. Except that he wasn’t playing in the sand, he was throwing it. At people. Dogs. Other children. Himself. And between throws, he would return to his mother, not for a hug, or a “hello,” but to rip pages out of her book. Shredding them. Eating them. And what was the mother doing? Nothing. Well … she was reading. (How, I have no idea.) But was she doing anything to restrain, discourage or curtail her three-dimensional monster’s excessively aggressive mischievousness? No. And this is the kicker, ladies and gentlemen: guess what she was wearing. “A hat?” you say. Well, no, actually … She was wearing a scarf. But it was yellow! Mostly. Partially. Sort of.
This made me think that maybe I haven’t been looking at the big picture. Maybe I need to take a step back.
Insomuch as it is the job of my wife and I to nurture and protect our toddler, perhaps George’s mischievous behavior can be attributed to a certain fellow with a jaundice-colored sombrero. As my wife oh-so-wisely observed a few weeks ago: “Who the hell brings a monkey to a baseball game?” Or the ballet. Or a library. Or anywhere that doesn’t have bars and a padlock. Who is this mysterious “man with the yellow hat” and why is he such an irresponsible guardian?
Have I been missing the entire point of these stories?
Are Curious George’s adventures … not really about Curious George? Are they, in fact, a plea to parents to not be like the man in the yellow hat? Are we to learn from his poor—nay, dreadful—example? Is it up to us to fill in the times outs and the repercussions?
Maybe this George character is cleverer than I thought. I think there may actually be a method to his mischievousness. Does that mean—
Ah … My time here seems to have come to an abrupt end. My toddler is prodding my kidney with a book. “What title have you brought me now, my darling? Let’s see … Curious George and the Hot Air Balloon.”
A hot air balloon???
Who the hell brings a monkey up in a freakin’ hot air balloon??

James C. Ferguson is an author, playwright and screenwriter living in Los Angeles with his wife, daughter and a dead plant that should probably be thrown away. His novel, Context Clues, is available on Amazon.com. And his film, Happy Holidays, will be available this winter. (Look for info. on MySpace and Facebook.)