Two Comedians and a Baby Running an Internet Company in the Garage.

The title is not an exaggeration. Last year, comedian Graham Elwood and I started comedyfilmnerds.com since we were so tired of trying to get work with web companies or any other company for that matter. So we thought we should just become competitors. Of course we were doing it all ourselves and on less than a shoestring. So everything took longer and the credit card balances went up for both of us.
Our goals were ambitious. We wanted to feature movie reviews and columns written by professional comedians, interviews and comedy CDs, DVDs and books available for sale along with movie downloads. We’re a mix of Filmthreat, Amazon and ITunes. So our site was cobbled together with duct tape and off we went. And then it crashed and didn’t work. Many times. That has mostly been corrected.
Audge was on maternity leave while we started everything. We were so excited. We moved my office into the garage and that was going to be the baby’s bedroom. At first I was disappointed but if anyone with children knows, to have a room detached from the rest of the house is much more awesome than either parent will let on to the other.
So every Tuesday Graham comes over and we play “internet moguls” in the garage. We have a blast. We laugh, work, and strategize. And then we try to slowly learn how to get people to come to our website.
But my wife’s maternity leave ended and she soon went back to work and I was suddenly a stay at home dad/comedian/author/filmmaker/web guy. It’s been tough, but we’re getting through it. We’re both working double shifts as we switch off from work and childcare duties and try and get a few hours of sleep in the process. Between working on the website, finishing the book and doing an occasional show there wasn’t been much time left.
So Graham and I shifted our website schedule to later in the day and my son Griffin was now part of the mix. He would be present at the reading of the minutes and have voting rights during board meetings.
So now Griffin is almost a year old, and it’s been about a year since we launched the site. But now Griffin is crawling and he won’t stay in the “bouncy chair” whileF Graham and I struggle and take an hour to try and add a jpeg image of a T-shirt to our online shopping cart.
There are times when Graham holds the baby as I look up a purchase order or find out who Doug Benson is supposed to make a CD out to. The first time I asked him I just flat out said, “Is that weird, that I’m asking you to hold the baby?” He laughed and said no, he has many nieces and nephews and much practice. So I gave Griffin to Graham and he instantly took to him and tried to rip his necklace off. I think it was made of shark teeth or something because Graham’s a surfer and they… all fight sharks, right?
Now you expect comedians to make you laugh, get drunk, hit on waitresses and pass out in a back alley of a club somewhere. OK, we’ve all done it. But it’s a weird picture to see two comedians taking care of a baby. It’s an especially weird picture for the actual comedians.
But here’s the thing: I’ve never been happier. I’m doing my own thing. Taking care of my baby, running a business and there is no one to answer to. If I’m going to learn how to use a website content management system and learn how to use Microsoft Accounting (and I’m still learning, very slowly), I’m going to do it for me, and not anyone else.
I’m sure our company would be making millions of dollars right now if we had things like a staff and a marketing budget. And maybe a new computer. But it is making a little money, thanks to the support of comedy and film fans, comedians, filmmakers, advertisers and other people supporting us along with one intern who is trying to figure out a nice way of telling us she’s too busy to help us anymore. And of course the support from OMM during my book release (PACIFY ME: A HANDBOOK FOR THE FREAKED OUT NEW DAD) has been amazing.
We’re in the middle of rebuilding comedyfilmnerds.com (we originally called it comedyfilmnerdsdotcom.com but it was screwing up navigation and links) and my son is getting bigger. I can see the growth in every part of my life right now, and it feels good. Having children changes your perspective for the better. WAY better. And starting my own business has changed it even more. I’m not “industry obsessed” or constantly “waiting for someone to call me back” anymore. And even if I’m having a bad day, Griffin smiles at me and then it simply doesn’t matter anymore. Now about that million dollars…

Chris Mancini is a comedian and author. His first book “Pacify Me: A Handbook for the Freaked-Out New Dad” is now available for purchase. Enter to win the book for FREE! 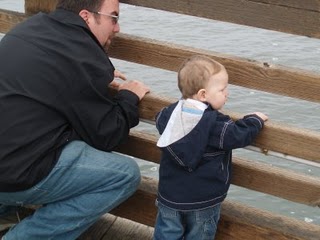 Written by Chris Loprete
Every summer during my childhood my family would drive 7 hours south to North Carolina from Pennsylvania. On the way we would have to cross over the Chesapeake Bay Bridge, a 17 mile long bridge that spans the picturesque Chesapeake Bay, in Virginia. There are 2 places along the span where the bridge goes under water and turns into a tunnel. It always looks so foreboding from the northern side. You can’t see the end of it and the bridge just disappears into water in 2 places. When we were halfway across, I always thought, “If this thing goes, we’re in real trouble.” and, “How do they get traffic through if there’s an accident? We could be here for hours.” Then when we got to terra firma on the other side, I always realized that I had just experienced the most thrilling part of the 7 hour trip and actually looked forward to that part of the drive every summer. Well, lately I’ve been feeling like I’m halfway across another bridge. This bridge is a “transitional” bridge with the young adult starting a family on one side and the middle aged family man on the other. Like the Chesapeake Bay Bridge, its long, I can’t see the other side and I may even go under water a couple of times. But I know that I really should relax, enjoy the ride and be confident that a sandy beach waits for me up ahead. To tell you truth though, I’m just plain exhausted.

I quote the late, great Madelaine Khan from Blazing Saddles, ”I’mmm soooo tired.” (cue the chorus of German soldiers). Now if you’re reading this blog, most likely you’re a mommy or daddy which means you’re saying, “Yeah. Cry me a river, dude. We’re all tired.” I KNOW! I’m not telling you anything you don’t know. I’m just telling you my own experiences. That’s why these blogs are so brilliant and relatable. I truly am a magnificent talent. Anywho…

I’m the happiest I’ve been in a year. I don’t want you to mistake my exhaustion for depression. And I’m not even THAT tired currently…although I was literally up all night nursing my wife through the granddaddy of all migraines so I guess I AM exhausted at this exact moment. Generally speaking though, I am not really that worn out. Still last Monday morning I woke up looking at another work week and I almost collapsed in the shower for some reason. I just started to anticipate the coming months and years and how draining it was going to be. We’re 6 weeks from giving birth to our 2nd child…a boy… who has a 3 year old brother…who has boundless energy. I’m truly excited for the arrival of the newest member of our club and am not half as scared I was when we had our first son, BUT I’m also anticipating the work that accompanies another infant and toddler. In addition we just put our house on the market which means it’s very possible that someone could make an offer soon. That would mean we would have about 4 weeks to find another place, pack up and move….and I told you about the baby coming in 6 weeks right? Well, it’s probably more like 4. So while I’m driving my wife to the hospital, I can say to her, “Okay hon, but let me stop and drop a couple of boxes off at the new home first.” To top it all off I have a creative job that I LOVE and while it is far from digging a ditch or working on the freeway, it is constantly busy and mentally draining. And of course I’m hoping that I will keep working my way up the ladder which means more responsibilities and harder deadlines.

Am I really writing a blog about being tired? Geez. Tune in next month for my compelling blog entitled, I’m Hungry!
I guess my point is this. When does it start to get easier? Or does it? Growing up, I never saw my parents sweat. Everything just seemed to be settled and pretty easy. A nice home, vacations, clothes on our back and food on our table. Were they just protecting us kids from their tough times and stressful worries? It’s very likely. I guess that’s one of the many perks of being a kid. So I guess my situation isn’t any different than normal families. It’s just that I want so badly to give my kids everything I had and never make them feel guilty or even let them see me work hard for it. I don’t think there’s a time in the foreseeable future when that will happen. I’m tired of struggling. I’m tired of working at settling down. I want to BE settled. When Braden was first born I had a difficult time crossing the bridge to fatherhood, but now that I’m on the other side, I love it and I’m ready to live that life fully. When can we start saving money instead of living paycheck to paycheck? When can we take a family vacation? When do my wife and I start getting invited to those fun suburban key parties like the ones they had in the 70’s?
(KIDDING!!!! Please don’t hate me for that last one. It was time for a joke.)
When do I join the middle class for real? I can’t blame it on the recession either. My wife and I have always worked in the entertainment industry. We’ve been in a recession since the day after our college graduation. I am so incredibly fortunate that I’m married to my best friend, have the greatest little boy in the world (better than yours. sorry), have a roof over my head and a job (to say nothing of the fact that I’m in the rare situation of having a job that I enjoy!) So don’t get me wrong. I count my blessings every day. I’m just….ready to get to the other side of the bridge. And really tired.